Parquetry flooring in the versailles Palace, by Marc-maison 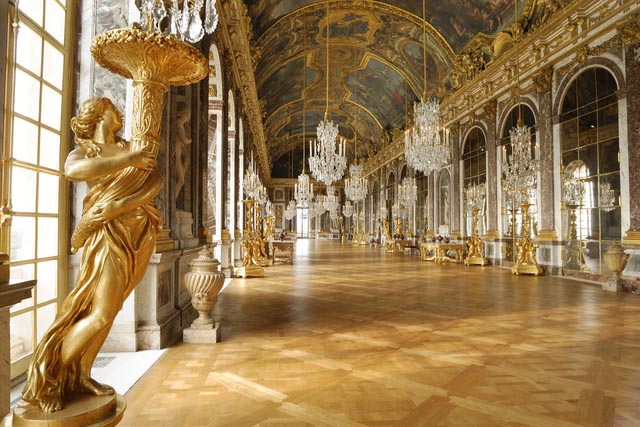 “The parquet flooring that made the Versailles Palace proud, with interlaced diagonals, is a Grand Style’s legacy that is still available today. It covers since 17th century a large amount of prestigious homes and is still a parquetry reference that cannot be overlooked.

One of the first esthetic inventions bringing the rustic hard-floors to become true decorative “parquets”, the “parquet de Versailles” pattern (Versailles parquet floor) is designed in 1684 to glamorize the Versailles Palace ’s rooms. In fact, since 16th century, Renaissance’s homes progressively get hard floors made out of simple woods in order to gain phonic and heating comfort. It is then floorboards put next to each other. Associated to prestige when it first appeared in 16th century, hard floors popularize in 17th century as domesticated animals are separated from human home, making hygiene easier.
The brick pattern floor (“à l’Anglaise”) for example, is assembled by straps put into gouges, with 3 to 4 inches boards posed with invisible nails.

For the King’s home, ancient pavings hands over to something totally different than simple hard floors : a sophisticated cover, indicator of luxury. Once the construction works were finished in 1693, Nicodème Tessin writes :
“In Trianon (…), parquetry is quite like paneling. There’s one single room in Versailles which parquet is not by squares (…) the entire rest is diamond-shaped in the new style”.

Parquetry is an element of aristocratic decoration, its name referring to the “parc”, enclosure surrounding the stage where Justice was given. Different parquetry patterns, as “Herringbone” or “parquet de Versailles” were born, legacies of technical and esthetic key progresses.

Named “French style parquet” (“parquet à la Française”) in 17th and 18th centuries, sometimes “thumbed compartment parquet” (“parquet à compartiments à l’onglet”), the parquet de Versailles is distinguishable by its square panels (composing the entire parquet), always counting 42 mortices, 42 tenons, and 42 dowels, hand assembled with no glue, and waxed. The dowel fixing mounts and tenons guarantee the authenticity of the fabrication procedure. Most of the time in plain oak, this parquet is generally posed in diagonal in function of the room, but the original rule is to arrange it starting from the fireplace.

The thickness of the parquet de Versailles is usually from ¾ to 1,5 inches, and can vary up to 2 inches for very humid ground-floors. It is supported by lambourdes and joists forming a basic floor under the squares. Large squares, from 3 to 4 feet according to the room’s dimensions, skillfully create an airy space, a dimension criteria set in 1770 (André-Jacob Roubo, The Carpenter’s Art). In 17th century, they are often separated by friezes, which gives a very partitioned aspect to the parquet.

The parquet de Versailles provokes a huge enthusiasm in 18th century, at which time the parquet squares were always made out of waxed oak wood. It is notably displayed in reception halls of period castles and mansions, as aristocracy holds it as an essential element for a fashionable decoration. The prestige that is connected to it and its esthetic qualities keep it in vogue in Louis XIV, Louis XV and Louis XVI styles.

The parquet de Versailles belongs to a time of esthetic sophistication, a time it evokes in return. Other motifs were born then, like the parquets of Chantilly and of Aremberg, as well as the “marquetry parquets” or “mosaic parquets”. The Château de Maisons-Lafitte displays a beautiful example of it, with floral motifs as well as the oval rooms of Hôtel Soubise, that showed “parquets of various woods with very ingenious ornaments and compartments”.

A classical and top-of-the-range parquet, the parquet de Versailles is still broadly exported. Its elegance and geometrical sobriety matches all kind of interiors. 18th century specimen are still commercialized, confirming its exceptionally high quality, and providing homes the matchless charm of antique, but modern fabrications also exist that are made by the book.”

Copied in entirety from here, they own the rights: we do not own, nor wish to plagiarize, only to encourage research into the flooring: https://www.marcmaison.com/architectural-antiques-resources/versailles-parquet-floor