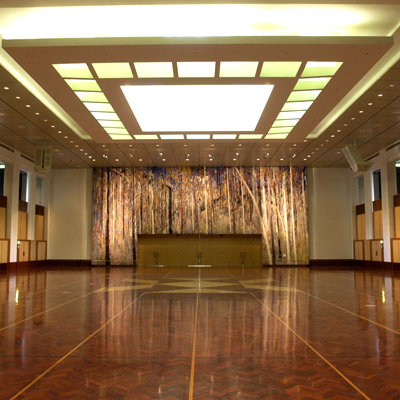 The venue for large formal receptions, dinners and significant national major events, the Great Hall in the Australian Parliament Canberra features a highly polished parquet floor and wall panelling made primarily from Australian timbers. Known as the room of the land, the Great Hall conveys a sense of how the physical environment has shaped Australia.

The parquetry floor is made of native jarrah, with inlays of blackbutt and ebony. Not a tree that is native to Australia, the ebony was a gift from the people of Papua New Guinea. The timber walls that surround the two levels of the Hall are also made from a variety of timbers, including limed white birch, brush box and jarrah.

The magnificent floor draws the eye to the centrepiece of the Great Hall, a spectacular tapestry based on a painting by celebrated Australian artist, Arthur Boyd. One of the largest tapestries in the world, it depicts the essence of the Australian landscape with the textures and colours of life under the canopy of a eucalypt forest.

Much of the interior finishing in Parliament House features wood, expressing a national identity and being a natural material with warmth, beauty and versatility. Native hardwoods from all over Australia were used in solid sections in hard wearing areas such as floors, skirtings and railings, and on handrails and doors. Brush Box was chosen for its hardness and density to floor the major circulation areas.